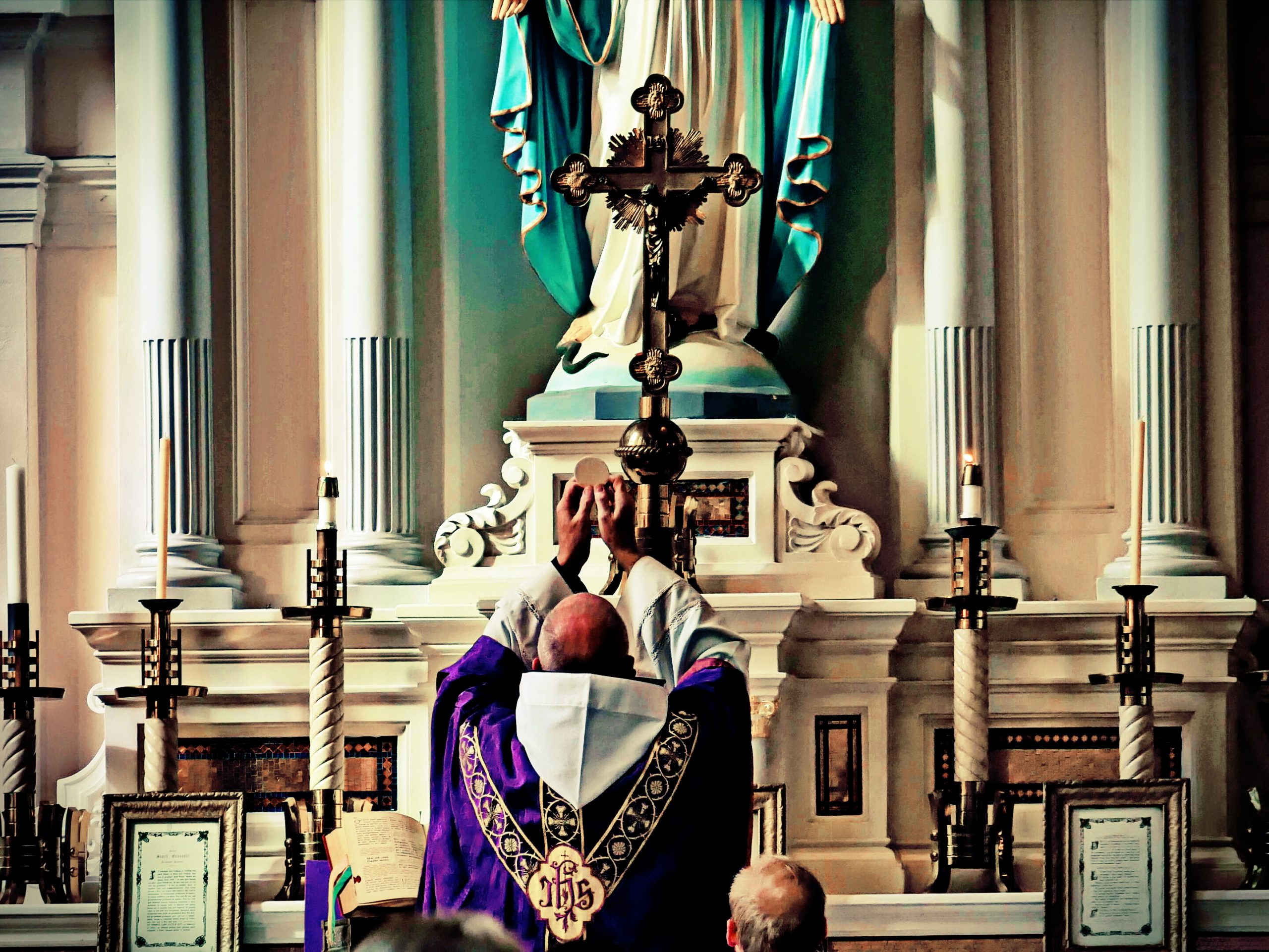 Being the Source and Summit of our Holy Catholic Faith, the Eucharist undoubtedly inspires a sense of awe in Faithful Catholics that few things on earth could ever manage to do. From the uttering of devout, silent prayers in honor of the Sacrament Most Holy, to the anxious anticipation of receiving Holy Communion at Mass, to the countless minutes and hours spent before the Blessed Sacrament captured in a luna placed in a monstrance at adoration chapels, Our Lord Jesus Christ in the Sacred Host and Precious Blood is perhaps the most consistent part of how we practice our Faith.

Its Sunday. High Mass is scheduled and begins. The sacristy bell is rung, the organ initiates music, the schola belts out the processional hymn, and then the music of the Mass. In the course of this Mass, the priest chants, bells are rung, a thurible’s chains clank, pews and kneelers creak and thud, and the public worship of the Church bounces off plaster walls, filling sound waves with reverence and solemnity. And then it falls silent. Its that moment. The celebrant bows over the altar, utters ancient words, and consecrates ordinary bread. He then genuflects and elevates the Source and Summit, holds the God-man there, and then solemnly lowers Him. All the while the Faithful look with loving eyes and beating hearts, whispering prayers, blessing themselves. A miracle has just taken place and they witnessed It.

Since Apostolic times, the Blessed Sacrament has been elevated at some point in every sacred liturgy. In those ancient times, the elevation happened as an act of reverence just before the reception of Holy Communion. In the Eastern liturgies, the elevation is accompanied by the words, “Holy things for the holy.”

Our Roman Rite practice of elevating the Sacred Species after the words of institution unfortunately shares nothing in common with ancient practices. The canon of the Mass, containing the consecration, was prayed straight through, without any extra ornamentation. Beginning about the 12th century, the Roman Rite’s ritual of elevating the newly consecrated Host had started in France, and then from there, reached Rome, establishing itself in the Ordo by the 14th century.

By the 12th century, the practice of lifting the Host at the words of institution had been established. The unconsecrated bread was lifted at accepit panem – he took bread. The bread was lifted

to about breast height, and then the words of institution were spoken; the priest then raised the Consecrated Host to be seen by the people for just a moment, and then lowered It and laid It on the altar. At this point, he moved on to the consecration of the chalice. Before long, the holding up of the newly consecrated Sacred Host began to last a few moments longer. Of peculiar note is that at some point, the bishops feared the Faithful might worship ordinary bread, so laws were issued to make sure priests did not raise the bread to within eyesight of the Faithful too soon. The practice of elevating the Blessed Sacrament that the Faithful may see It, upon the words hoc est enim corpus meum, developed as a means to make evident that the bread had at once been consecrated. It does not appear that this elevation was intended for a direct act of worship; rather, it’s aim was to give notice that the consecration took place.

During the 12th century, classic theological debate began, and did so at the University of Paris. Was the consecration of the bread dependent upon the consecration of the wine? If something interrupted the consecration, like sudden sickness or finding no wine in the chalice when uncovered, should the bread then be re-consecrated? Ultimately, it was decided that, because the Apostles received and consumed the Host consecrated by Our Lord before He consecrated the wine, the consecration of the bread was sufficient for the bread. The bishop who first ordered the consecration elevation in the Roman Rite, Eudes de Sully, bishop of Paris, issued a decree that if the wine were to be found missing from the chalice, after it gets supplied, the celebrant should begin at simili modo, the words which begin the act of consecrating the wine. His decree further stated that priests were not to raise the Host so high that It be seen by the people during the words of institution, but after, and then priests were to elevate the Host high enough to be seen. From here, the custom spread rapidly, and was all over the West by the 13th century.

Not so common, at this point, was the elevation of the chalice. This was due to the practical aspect of not being able to see, from the Faithfuls’ perspective, the consecrated wine inside the chalice as its being elevated. Also, at this point, the genuflection by the celebrant had not yet been introduced. Instead, he bowed, until about 1570. By the later middle ages, we begin to see practices familiar to us. These practices were introduced out of enormous devotion by the people. The moment of elevation became such a huge devotion for the Faithful, that they had not felt they heard Mass without a proper viewing of it. Boys were dismissed from class to observe the elevation. A man by the name of John Becon, during the Reformation, while attacking the Mass, said that if the celebrant did not hold the Sacred Host high enough, “the rude people of the countrey in diverse partes of England will crye out to the priest: houlde up Sir John, houlde up. Heave it a little higher.” This desire to see the elevation went on to be the cause of the bells being rung upon the consecration. A bell just before the consecration was rung to invite outsiders into the church to view the elevation. There is mention around the year 1115 that the church bell was rung at the elevation. It wasn’t until the 13th century that we find the first reference to incense being used during the elevation, by Dominicans. That practice eventually made it to Rome towards the end of the 14th century.

Its hard for me to imagine Holy Mass prayed without the extensive ceremony that accompanies the consecration we see today. Some practices, beliefs and disciplines have clearly developed over time within the bosom of Holy Mother Church. Its probably safe to assume not a few pious Faithful argued that “no true traditionalist” would accept such an innovation like raising Our Lord higher, still higher. Healthy criticism should be welcomed, but critics must also leave open the possibility that such developments or adaptations ought to be judged on the worthiness and goodness of it, and not on the fact that it merely exists. Our Patron, Pope St Pius X, granted an indulgence to the Faithful who gazed upon Our Lord in the Blessed Sacrament, elevated in His priest’s hands. As Jesus is lifted to be seen, it cannot be wrong to look at Him. Likewise, the earlier practice of bowing cannot be wrong.

It is true that this medieval ceremony of the elevation has tended to become a new center of gravity for the Mass. It is possible to exaggerate its importance. A rite unknown till the XIIth century cannot be of first importance in any liturgy. We must teach our people that the essence of the Mass is not the elevation, but consecration and communion.

– The Mass, A Study of the Roman Liturgy, Adrian Fortescue

But it is a strikingly beautiful moment.