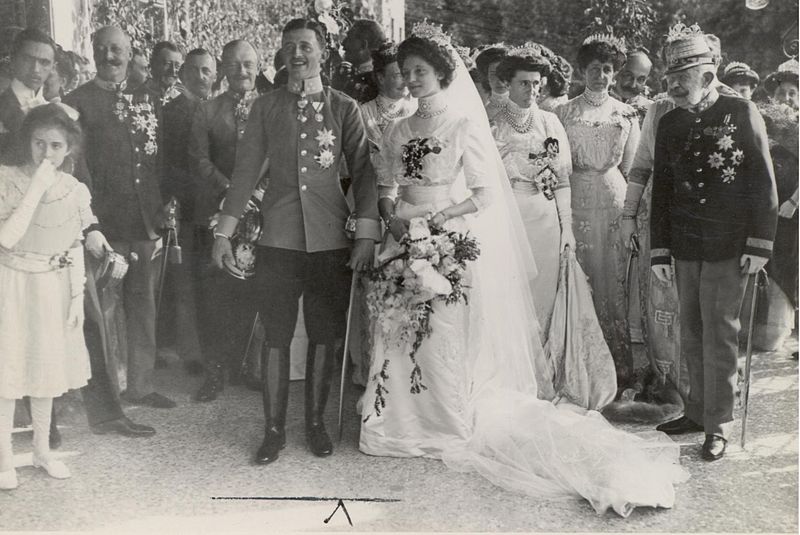 Obscuring Basic Values of the Common Inheritance of Humanity

CLEVELAND, Ohio — No shortage of commentary currently exists regarding the Holy Father’s curious words about legal covered homosexual civil unions. Greater and more educated minds than this author’s have opined well and thoroughly on the matter. The scope of this article is to address a local memorandum which was sent to priests of this Diocese from His Excellency, Bishop Edward Malesic.

Our Bishop, like many others, has exercised his pastoral duty to assure the Faithful that Catholic Truth, moral Truth, remains unchanged. Confusing words from the Pope, in the context of a documentary film, in no way account for magisterial teaching or law.

Before I go any further, let me explain the choice of the heading image above. While this posting is about the current crisis, I chose the polar opposite of that crisis to be the image reflecting this article. It is from the marriage ceremony of Blessed Karl of Austria, a truly Catholic monarch, and his bride, Empress Zita. That image, like any image of a marriage between one man and one woman, is the DEFAULT and only legal position affirmed by the Catholic Church. The instruction from the Bishop to his priests was given in an effort to provide talking points as pastors and parishioners unobligatorally interact this weekend. We are reminded that the Sunday obligation remains suspended, as far as I know.

After the assurance that Church law has not changed, that respect for the dignity of all persons at all times, regardless of sexual “orientation,” is required, His Excellency said,

“…safeguarding the civil rights of peoples by legal authority, even if they are living in situations that we do not condone.”

Furthermore, we are advised “to go to the Pope’s actual words in the proper context.” This is sound advice, and it appears a direct quote from the Holy Father is,

“What we have to create is a civil union law. That way they are legally covered.”

The words chosen by the Bishop are confusing to me. I’m not aware of any instance of individuals with homosexual attractions being civically cut-off from enjoying basic, human, civil rights; I’m also unaware of any societal movement to criminalize homosexuality or cohabitation. So what is there to safeguard? This isn’t to say that prejudice doesn’t exist; it sure does. But western society as a whole has generally accepted the LGBT community. In fact, the target of direct aggression, both socially and civically, seems to be heterosexuality, faith and marriage.

The talking point in article #5 of the memorandum is that cohabitating couples apparently enjoy some rights common to married couples. It is a reasonable position to take, but we need to know what civil rights our Bishop is saying should be safeguarded. The only thing he follows with is telling us to go find the actual quotes from the Holy Father. Pope Francis has said civil unions need to be created in order to provide legal coverage.

There doesn’t seem to be any argument that Pope Francis actually holds the opinion, as he has publicly stated, that marriage is between one man and one woman. He has also called for legally recognized homosexual civil unions. The memoradum from our local Ordinary does not, however, clarify the Church’s teaching on homosexual civil unions, nor does it instruct priests to provide that guidance to the Faithful. It only provides an assurance that the Holy Father was taken out of context, along with a banal plea to safeguard civil rights of cohabitating couples. In Her Wisdom, the Church, through the CDF and Pope St. John Paul II, provided charitably clear guidance on the specific matter affronting us today. Quoted below are the parts I found particularly helpful.

Those who would move from tolerance to the legitimization of specific rights for cohabiting homosexual persons need to be reminded that the approval or legalization of evil is something far different from the toleration of evil.

Evil has no legal coverage.

In those situations where homosexual unions have been legally recognized or have been given the legal status and rights belonging to marriage, clear and emphatic opposition is a duty. One must refrain from any kind of formal cooperation in the enactment or application of such gravely unjust laws and, as far as possible, from material cooperation on the level of their application. In this area, everyone can exercise the right to conscientious objection.

…Laws in favour of homosexual unions are contrary to right reason because they confer legal guarantees, analogous to those granted to marriage, to unions between persons of the same sex. Given the values at stake in this question, the State could not grant legal standing to such unions without failing in its duty to promote and defend marriage as an institution essential to the common good.

But if a law does not mandate a particular behavior, and only recognizes a reality, how can that be wrong?

…one needs first to reflect on the difference between homosexual behaviour as a private phenomenon and the same behaviour as a relationship in society, foreseen and approved by the law, to the point where it becomes one of the institutions in the legal structure. This second phenomenon is not only more serious, but also assumes a more wide-reaching and profound influence, and would result in changes to the entire organization of society, contrary to the common good.

…Lifestyles and the underlying presuppositions these express not only externally shape the life of society, but also tend to modify the younger generation’s perception and evaluation of forms of behaviour. Legal recognition of homosexual unions would obscure certain basic moral values and cause a devaluation of the institution of marriage.

Society survives because of the marriage between a man and woman.

The principles of respect and non-discrimination cannot be invoked to support legal recognition of homosexual unions. Differentiating between persons or refusing social recognition or benefits is unacceptable only when it is contrary to justice. The denial of the social and legal status of marriage to forms of cohabitation that are not and cannot be marital is not opposed to justice; on the contrary, justice requires it.

It is common for defenders of marriage and moral truth to be put on the defensive. Make no mistake about it, justice is on the side of opposing evil and standing up for the common good.

Nor can the principle of the proper autonomy of the individual be reasonably invoked. It is one thing to maintain that individual citizens may freely engage in those activities that interest them and that this falls within the common civil right to freedom; it is something quite different to hold that activities which do not represent a significant or positive contribution to the development of the human person in society can receive specific and categorical legal recognition by the State.

…Nor is the argument valid according to which legal recognition of homosexual unions is necessary to avoid situations in which cohabiting homosexual persons, simply because they live together, might be deprived of real recognition of their rights as persons and citizens. In reality, they can always make use of the provisions of law – like all citizens from the standpoint of their private autonomy – to protect their rights in matters of common interest.

Further clarification from our own Diocese is necessary regarding the Bishop’s statement about “…safeguarding the civil rights of peoples by legal authority, even if they are living in situations that we do not condone.” Which civil rights are not enjoyed by people with homosexual tendencies living in cohabitation? The very pleasant and kind gay couple living across the street from me seem to have no difficulty functioning freely in society. But the Church has spoken clearly and profoundly on the matter, and homosexual civil unions can never be created or legally covered.

The Church teaches that respect for homosexual persons cannot lead in any way to approval of homosexual behaviour or to legal recognition of homosexual unions. The common good requires that laws recognize, promote and protect marriage as the basis of the family, the primary unit of society. Legal recognition of homosexual unions or placing them on the same level as marriage would mean not only the approval of deviant behaviour, with the consequence of making it a model in present-day society, but would also obscure basic values which belong to the common inheritance of humanity. The Church cannot fail to defend these values, for the good of men and women and for the good of society itself.