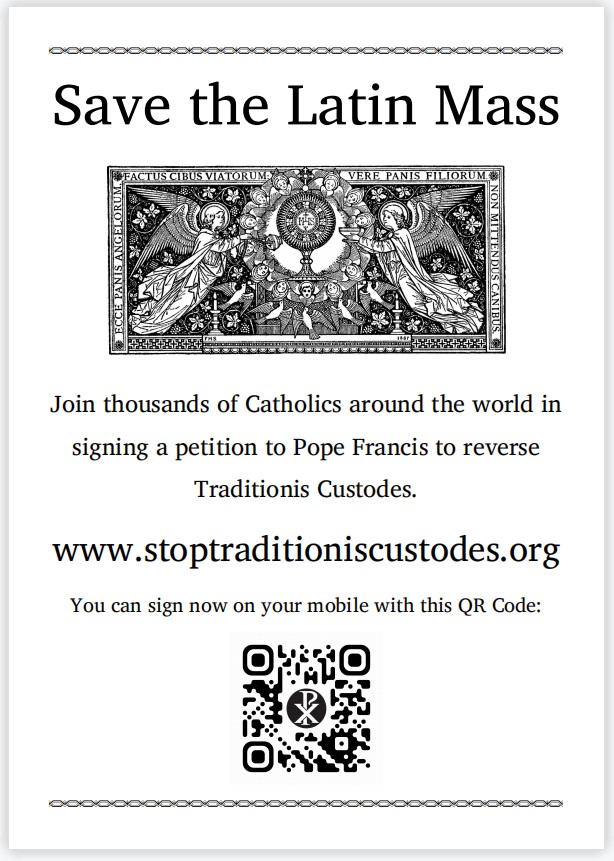 [vc_row][vc_column width=”2/3″][vc_column_text]An open letter to stop the madness has been authored. Pope Francis’ motu proprio seeks to end access to the Traditional Latin Mass. His motu proprio puts pressure on some bishops to conform to that destructive idea and encourages certain ideological others to simply do what they’ve wanted for so long.

This is the link to the website where it can be found, along with a form to submit your own name in support. A Letter to Catholics throughout the World – Stop Traditionis Custodes

Speaking recently with a Friend who was here in Cleveland during the “transitional” time of the TLM at St. Rose of Lima, he recalled how they were told not to worry, that nothing would be changed. Quite the opposite happened.

Here’s the text of the letter. As stated in it: “We will not remain inactive in the face of the spiritual suffocation of vocations that the Motu Proprio Traditionis Custodes will bring about. We will not deprive our children of the unique means of transmitting the faith that is faithfulness to the traditional liturgy.”

Dear Brothers and Sisters in Christ,

We have been deeply saddened to learn of Pope Francis’ decision to revoke the main provisions of the Motu Proprio Summorum Pontificum promulgated by Pope Benedict XVI on July 7, 2007. After decades of division and quarrels, Summorum Pontificum was a source of peace and reconciliation for all Catholics.

Rome has violated Pope Benedict XVI’s solemn word in a brutal and rigid manner that is a far cry from the fraternal welcome that is nowadays so widely proclaimed.

Pope Francis’ explicit intent, as expressed in the Motu Proprio Traditionis Custodes of July 16, 2021, is to see an end of the celebration of the Holy Mass handed down by the Tradition of the Church. We are deeply shocked by this decision. How can we comprehend this radical break with the traditional Missal, which is the “venerable and ancient” enactment of the “law of the faith”, and has borne fruit in so many peoples, saints and missionaries? And what harm is being done by those faithful who simply want to pray as their fathers have prayed for so many centuries? Who can ignore the fact that the Tridentine Mass converts many souls, attracts young and fervent congregations, and inspires many vocations; that it has been the wellspring of seminaries, religious communities, and monasteries; that it is the mainstay of many schools, youth ministries, catechetical work, spiritual retreats and pilgrimages?

Many of you – our Catholic brothers, priests and bishops – have expressed to us your incomprehension and deep sorrow: we thank you for your numerous testimonies of support.

Summorum Pontificum’s stated purpose was to promote peace within the Church in order to build unity in charity, but it was also designed to lead Catholics to renew their ties with their own inheritance, by helping as many people as possible to discover the rich liturgical tradition that is the treasure of the Church. Pope Emeritus Benedict XVI is witnessing the destruction of his work of reconciliation in his own lifetime.

In this age of materialism and of harrowing social and cultural division, liturgical peace is an absolute necessity for the faith and spiritual life of Catholics, in a world that is dying of thirst. The drastic curtailment of the authorization to celebrate Mass in its traditional form will rekindle mistrust and doubt, and heralds the resurgence of a devastating liturgical quarrel that will rip apart the Christian people.

Before God and before all men and women, we solemnly affirm that we will not allow anyone to deprive the faithful of this treasure which is first and foremost that of the Church. We will not remain inactive in the face of the spiritual suffocation of vocations that the Motu Proprio Traditionis Custodes will bring about. We will not deprive our children of the unique means of transmitting the faith that is faithfulness to the traditional liturgy.

As loyal children of their father, we ask of Pope Francis that he reverse his decision, repealing Traditionis Custodes and restoring full freedom to celebrate the Tridentine Mass, for the glory of God and the good of the faithful. Bread rather than stones.

September 8, 2021, Feast of the Nativity of the Blessed Virgin Mary

And something to print out: 2 thoughts on “Open Letter to Stop the Madness”