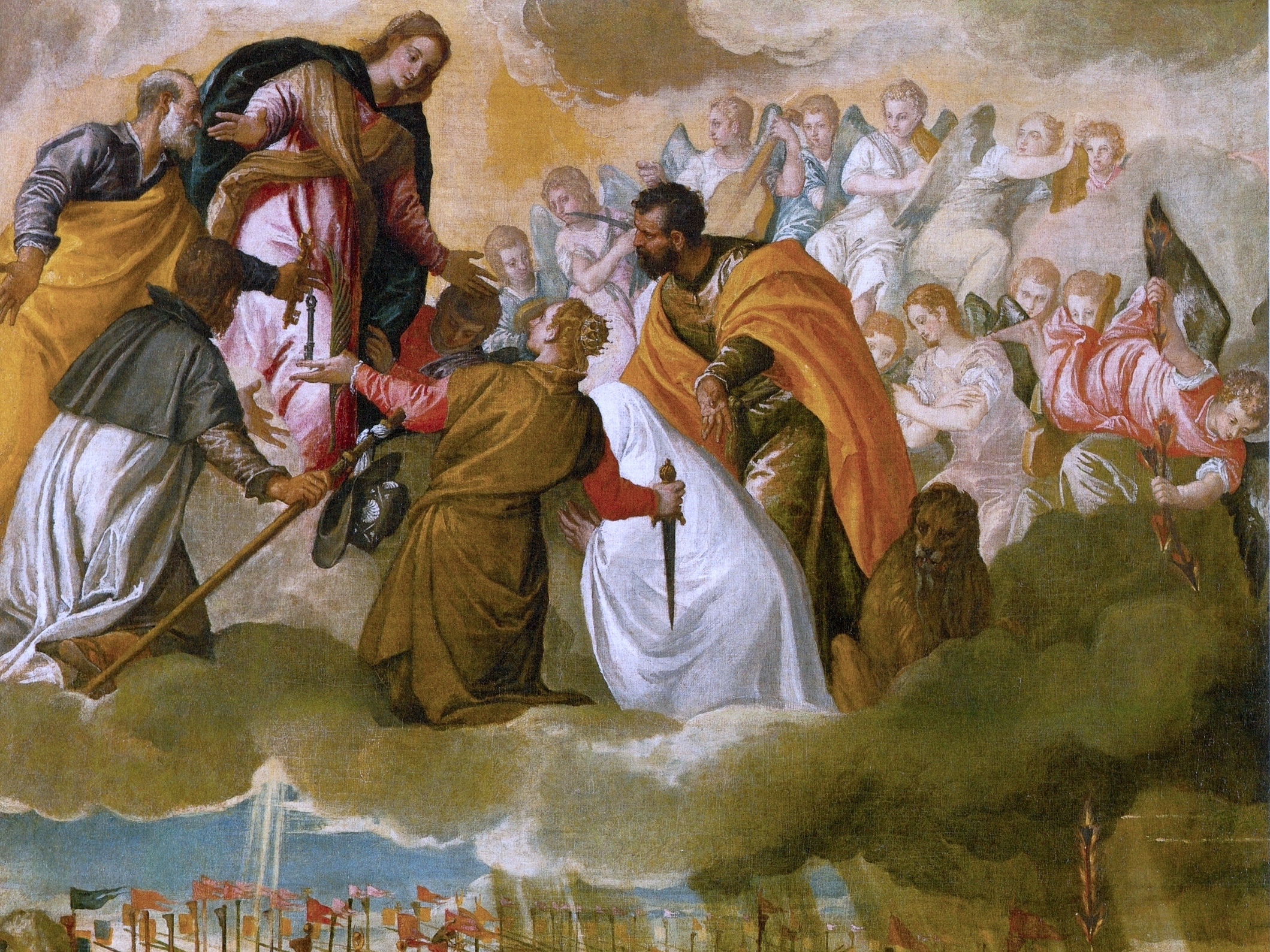 The Rosary is a Weapon

WARFARE — On October 7, 1571, a coalition of Catholic States, arranged by Pope St. Pius V, inflicted a major defeat on the Ottoman Empire in the Gulf of Patras. The coalition was known as the Holy League and this naval conflict is known as the Battle of Lepanto.

(From Wikipedia) The Ottoman forces were sailing westward from their naval station in Lepanto (the Venetian name of ancient Naupactus—Greek Ναύπακτος, Ottoman İnebahtı) when they met the fleet of the Holy League which was sailing east from Messina, Sicily. The Spanish Empire and the Venetian Republic were the main powers of the coalition, as the league was largely financed by Philip II of Spain and Venice was the main contributor of ships.

In the history of naval warfare, Lepanto marks the last major engagement in the Western world to be fought almost entirely between rowing vessels, namely the galleys and galeasses which were the direct descendants of ancient trireme warships. The battle was in essence an “infantry battle on floating platforms”. It was the largest naval battle in Western history since classical antiquity, involving more than 400 warships. Over the following decades, the increasing importance of the galleon and the line of battle tactic would displace the galley as the major warship of its era, marking the beginning of the “Age of Sail”. The victory of the Holy League is of great importance in the history of Europe and of the Ottoman Empire, marking the turning-point of Ottoman military expansion into the Mediterranean, although the Ottoman wars in Europe would continue for another century. It has long been compared to the Battle of Salamis, both for tactical parallels and for its crucial importance in the defense of Europe against imperial expansion. It was also of great symbolic importance in a period when Europe was torn by its own wars of religion following the Protestant Reformation. Pope Pius V instituted the feast of Our Lady of Victory, and Philip II of Spain used the victory to strengthen his position as the “Most Catholic King” and defender of Christendom against Muslim incursion. Historian Paul K. Davis writes that, “More than a military victory, Lepanto was a moral one. For decades, the Ottoman Turks had terrified Europe, and the victories of Suleiman the Magnificent caused Christian Europe serious concern. The defeat at Lepanto further exemplified the rapid deterioration of Ottoman might under Selim II, and Christians rejoiced at this setback for the Ottomans. The mystique of Ottoman power was tarnished significantly by this battle, and Christian Europe was heartened.” 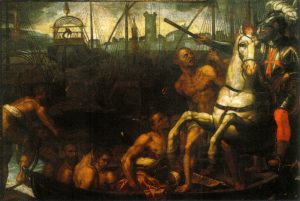 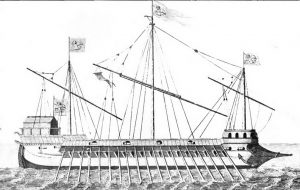 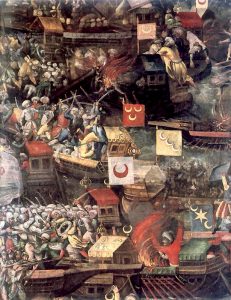 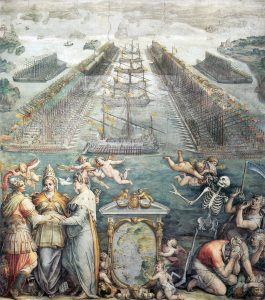 In The Victory of Lepanto and the Most Holy Rosary, Rev. J.A. Rooney wrote of the Battle of Lepanto.

On the 7th of October, 1571, on the Gulf of Lepanto was raised aloft by the Christian fleet the standard of hope–it was the image of the Blessed Virgin, surmounted by a Cross and a Rosary. The soldiers knelt before it for the purpose of venerating the emblem of our salvation and the Image of Mary, and pledged themselves to fight to death for the cause in which they were engaged, God and holy Church. Then the signal for attack was given by the Christian admiral.

In August of 1884, Pope Leo XIII issued an encyclical on the recitation of the Holy Rosary. The general sentiment, at least as I see it, is that the Pope saw immense value in using the Rosary as a weapon against various trials and tribulations. He wrote about how consoling it was to see the fervor of Catholics having great confidence in the Virgin Mary.

Last year, as each of you is aware, We decreed by an Encyclical Letter that, to win the help of Heaven for the Church in her trials, the great Mother of God should be honoured by the means of the most holy Rosary during the whole of the month of October. In this We followed both Our own impulse and the example of Our predecessors, who in times of difficulty were wont to have recourse with increased fervour to the Blessed Virgin, and to seek her aid with special prayers. That wish of Ours has been complied with, with such a willingness and unanimity that it is more than ever apparent how real is the religion and how great is the fervour of the Christian peoples, and how great is the trust everywhere placed in the heavenly patronage of the Virgin Mary. For Us, weighed down with the burden of such and so great trials and evils, We confess that the sight of such intensity of open piety and faith has been a great consolation, and even gives Us new courage for the facing, if that be the wish of God, of still greater trials. Indeed, from the spirit of prayer which is poured out over the house of David and the dwellers in Jerusalem, we have a confident hope that God will at length let Himself be touched and have pity upon the state of His Church, and give ear to the prayers coming to Him through her whom He has chosen to be the dispenser of all heavenly graces.

For these reasons, therefore, with the same causes in existence which impelled Us last year, as We have said, to rouse the piety of all, We have deemed it Our duty to exhort again this year the people of Christendom to persevere in that method and formula of prayer known as the Rosary of Mary, and thereby to merit the powerful patronage of the great Mother of God. In as much as the enemies of Christianity are so stubborn in their aims, its defenders must be equally staunch, especially as the heavenly help and the benefits which are bestowed on us by God are the more usually the fruits of our perseverance. It is good to recall to memory the example of that illustrious widow, Judith – a type of the Blessed Virgin – who curbed the ill-judged impatience of the Jews when they attempted to fix, according to their own judgment, the day appointed by God for the deliverance of His city. The example should also be borne in mind of the Apostles, who awaited the supreme gift promised unto them of the Paraclete, and persevered unanimously in prayer with Mary the Mother of Jesus. For it is indeed, an arduous and exceeding weighty matter that is now in hand: it is to humiliate an old and most subtle enemy in the spread-out array of his power; to win back the freedom of the Church and of her Head; to preserve and secure the fortifications within which should rest in peace the safety and weal of human society. Care must be taken, therefore, that, in these times of mourning for the Church, the most holy devotion of the Rosary of Mary be assiduously and piously observed, the more so that this method of prayer being so arranged as to recall in turn all the mysteries of our salvation, is eminently fitted to foster the spirit of piety.

Interestingly, and very relevant to our times, Pope Leo saw the Holy Rosary as a weapon also against a pandemic, the Asiatic cholera. The disease reached from India across western Asia to Europe, Great Britain, and the Americas, as well as east to China and Japan. He continued:

With respect to Italy, it is now most necessary to implore the intercession of the most powerful Virgin through the medium of the Rosary, since a misfortune, and not an imaginary one, is threatening-nay, rather is among us. The Asiatic cholera, having, under God’s will, crossed the boundary within which nature seemed to have confined it, has spread through the crowded shores of a French port, and thence to the neighbouring districts of Italian soil. – To Mary, therefore, we must fly – to her whom rightly and justly the Church entitles the dispenser of saving, aiding, and protecting gifts – that she, graciously hearkening to our prayers, may grant us the help they besought, and drive far from us the unclean plague.

In Cleveland, we have our own opportunity to observe the Battle of Lepanto.

Along with Low Masses available in the morning and evening, Mary Queen of Peace is providing additional devotions before and after Mass — Latin Rosary, Confraternity of the Holy Rosary, Scapular of St. Michael. See the bulletin snapshot. **If you know of another Mass, please include it in the comments below.