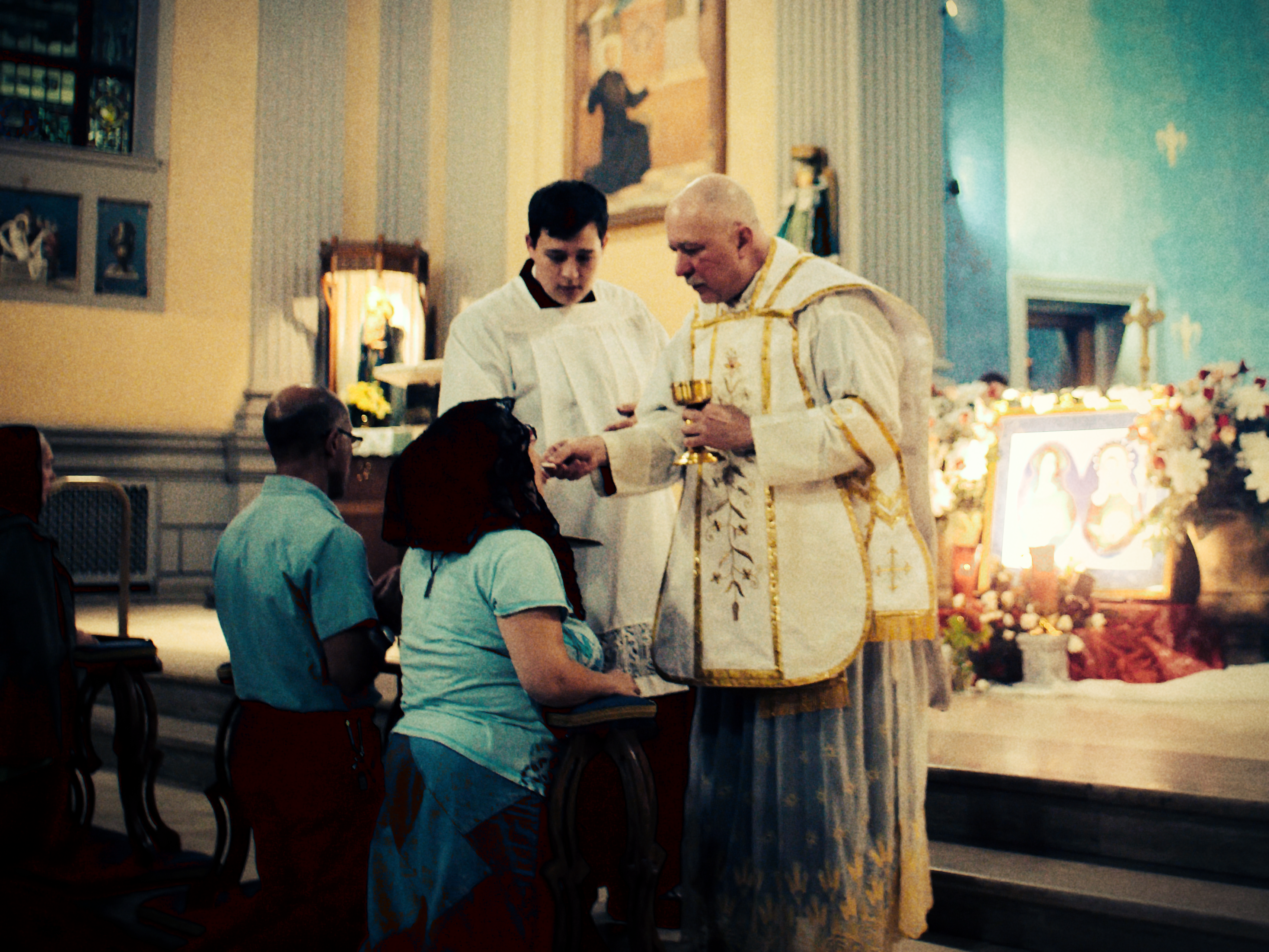 A Growing Movement Amid Chaos

OLD BROOKLYN, Cleveland — “Well…our numbers have not been ground-shaking for the daily Mass. We are averaging about 15-18 most days. But the Saturday morning Mass has been very successful with upwards of 50+ attending and almost 80 on the Assumption.”

Father Doug Brown, pastor of Mary Queen of Peace, began offering a Monday through Friday 6:15am Traditional Latin low Mass in June of this year, in the midst of a pandemic. Those daily masses were an expansion of the First Friday and the Saturday TLM’s he had already established at MQP some time ago.

Cleveland’s Traditional Catholic Movement has been a steady, healthy one. The movement has grown at a somewhat moderate pace, with periods of perceptible surges. Its safe to say, if I am recalling correctly, that a Latin Mass has been available every single day of the week, but only through visiting different locations. Daily Mass had usually been a mix of attending St. Stephen on the westside and Immaculate Conception on the eastside (The Mac, on Superior), along with a few more recently added venues in the Greater Cleveland area, prior to Fr. Brown’s new daily offering. By piecemealing the week together, one could have attended a daily Latin Mass, just not at one church. It is a situation which invited plenty of opinions, and even inspired both formal and informal efforts to bring a “traditional-rite parish” into existence in the diocese.

The missing element in the Traditional Catholic Movement in Cleveland has always been the singular location idea. Many Faithful Catholics who I’ve spoken with are hungry for a familiar place, a faithful pastor, like-minded community and rock-steady predictability. But I don’t believe this desire demands any sort of exclusivity or monopoly. Most people attached to Tradition would probably agree that the wider the spread, the better it is for Holy Mother Church.

Earlier in the week, a Friend informed me of some very exciting news. Fr. Brown had sent out an eblast, announcing, among other things, that MQP would begin offering a Traditional Latin Mass on First Sundays, starting September 6.

The expansion of the TLM to Sunday carries with it not only an anticipation of what’s to come, but a confirmation of that which already exists: a stable group — one of the conditions outlined in the motu proprio of Pope Benedict the XVI, Summorum Pontificum, by which a pastor is encouraged to accept the petition of the stable group and celebrate the Ancient Roman Rite.

When asked what spawned the idea to expand his Latin Mass schedule to include 1st Sunday, Fr. Brown said there has been a number of potential parishioners who have expressed interest in joining if there was to be a daily TLM available.  “So,” he said, “we are trying it by just having it on Sunday once a month. We will see how it goes.”

(As of 8/22/2020, Fr. Brown temporarily suspended all weekday Masses, due to a medical issue he is addressing. This posting will be updated as those Masses resume. Pray for Fr. Brown.)

Another Westside Parish in the Mix

As this article was being written, a Facebook Friend forwarded me some more news. St. Ignatius of Antioch, at the intersection of Lorain Ave. and West Blvd, will offer a Traditional Latin Mass every Monday evening, beginning September 14, the Feast of the Exaultation of the Holy Cross. On his Facebook posting, Father Kevin Estabrook, the pastor of St. Ignatius, wrote, “I’m extremely happy to announce I’m going to begin offering the EF every week at St Ignatius on Mondays at 5:30pm beginning September 14, 2020 – Feast of the Exaltation of the Holy Cross (High Mass).”

It Has Spread “Wonderfully Throughout the Diocese”

When Father Frank Godic, pastor of The Mac, announced the live-streaming of Traditional Masses from his parish during the lockdown, he rattled off in the video the list of the parishes currently offering the Traditional Latin Mass in the Diocese of Cleveland. The spread reaches nearly every area within its boundaries.

Along with St. Stephen, The Mac, MQP, and now St. Ignatius in Cleveland, there are Traditional Latin Masses at Immaculate Conception in Willoughby, Sacred Heart of Jesus in South Euclid, St. Elizabeth of Hungary in Cleveland, St. Paul in Akron, St. Rocco in Cleveland, and St. Sebastian in Akron, which has been the established “southern tier” Latin Mass for quite some time.

But for those who live on the outermost eastern and western edges, there is still room for growth. Cleveland TLM Friends has been contacted by quite a few Faithful Catholics over the years, asking if there is any known effort to get the Mass started in these outlying areas. My opinion has always been the same: its starts with a stable group and a faithful pastor. Part of the success of the Traditional Catholic Movement in Cleveland has been its grass-roots development, never relying upon diocesan involvement to get the ball rolling. This isn’t to insinuate a separatist attitude. Rather, the Traditional Catholic Movement finds its success in having a pure heart, one based upon love for Tradition and the Mass; its success is not the result of a manufactured accommodation by the less-than-interested.

Sunday was Suspended Long Ago by Catholics

Since mid-March of this year, the obligation to attend Holy Mass on Sundays and other days of precept has been suspended in the Diocese of Cleveland. For a period of time, Catholics in Cleveland could only access the Holy Sacrifice virtually, through televised or web-streamed Masses because of the civic lockdown.

Beginning around the Feast of Pentecost, the churches were re-opened and public access to the liturgy was largely restored and the parishes which offered the Traditional Mass mostly continued their schedule as it had been in place since before the invasion by the Wuhan virus.

That restoration, however, came with some very real hurdles for Catholics, both lay and cleric alike. The Diocese had issued lengthy guidelines for pastors to use upon the re-opening of their parishes. These guidelines were interpreted to varying degrees, depending on the viewpoint, or the confusion, of the pastor of the parish. Some parishes in the diocese took a very strict attitude in following the guidelines, in turn causing an exodus of some Faithful; some parishes got quite creative; still, others saw the guidelines as guidelines, not mandated laws. Stories of elaborately crafted booths with glass fronts and open slots at the bottom for the distribution of Holy Communion, and even that of distributing bagged Jesus come to mind. One unnamed entity is said to now prefer Traditional Masses because of the established, unchangeable method of distributing Holy Communion: it cannot invite practices of chaos or confusion.

Its hard to say at the moment if there will be any lasting fallout from these various decisions. Bishop Thomas Tobin of Providence, RI, recently tweeted that the Sunday obligation is practically done.

It’s clear that on a practical level, the discipline of attending Sunday Mass is gone. Post-pandemic we’ll have to invite people back to Mass by creative outreach, and by emphasizing the importance of Christian community, the Word of God and the Holy Eucharist.

Friends, my fear is that it may get worse than that. When relaxed practices get accepted, they generally become expected, and rarely, then, is the stricter form ever resurrected.

The continued growth of the Traditional Catholic Movement, both locally and abroad, would seem to indicate there is no problem with the discipline of attending Sunday Mass by those attached to the TLM. As a matter of fact, for decades there has been statistical evidence showing that not only do a significant number of “Catholics” fail to attend Sunday Mass year after year, but belief in the Real Presence is at a new all-time low.

In December of 2019, EWTN reported a poll reflecting that only 39% of Catholics attend Mass every week, and a new low of only 49% believe in the Real Presence of Jesus Christ in the Blessed Sacrament. Getting people to Mass is not a novel coronavirus problem. The collective dismissal of the Third Commandment by the shepherds of the Church only added to an already existing crisis of Faith.

While reflecting on his “Summer of Covid,” Fr. Brown echoed some words that many individuals and families in the Traditional Catholic Movement would say applies to their own experience with the Latin Mass, the reception of the Sacraments and the graces received from true pastors: “In some ways, I have reclaimed my priesthood in a way that I never thought would be possible. Whether it has been offering the Extraordinary Form of the Holy Roman Rite (Latin Mass) on an almost-every day basis to the increase in Confessions to the simple joy of the Sacraments and the graces received by the faithful, I feel more “alive” as a priest than I have for years.”

It is true that diamonds are formed through intense heat and pressure. And therefore its not surprising that we find ourselves in a time where the wheat is growing so strongly among the weeds. In fact, its probably the only way it could in these chaotic times. 2 thoughts on “The Traditional Catholic Movement”